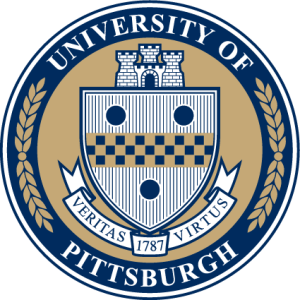 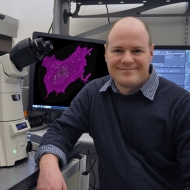 Gerry earned his degree in Cell Biology from University College London and his PhD in Biochemistry at the Cancer Research UK London Research Institute (since amalgamated into the Francis Crick Institute) with Giampietro Schiavo. From there, he worked as a post-doc with Robin Irvine at the University of Cambridge, before becoming a research fellow at the National Institutes of Health in Bethesda, MD under Tamas Balla. He started the lab at Pitt in 2015.

A self-confessed “lipid enthusiast” since his undergraduate days, Gerry now revels in leading a team of talented scientists focused on lipid function in health and disease. His love of lipids also extends into the culinary realm, which has necessitated working out what the inside of a gym looks like. In his spare time, he enjoys reading, sunsets and long walks on the beach.

Rachel Wills is a second year graduate student in the Interdisciplinary Biomedical Graduate Program (IBGP) at the University of Pittsburgh. Prior to graduate school, Rachel obtained her BA in biology, with honors, from Thiel College (Greenville, PA) in 2012. Rachel discovered her love of lipids at Pitt working as an RA in Erin Kershaw’s lab. She joined Dr. Gerry Hammond’s lab in June of 2016. Since then, she has been working to determine the regulatory mechanism(s) behind the homeostatic control of PtdIns(4,5)P2 levels.

When not in lab, Rachel enjoys long walks on the beach with her cat, Sylvester. 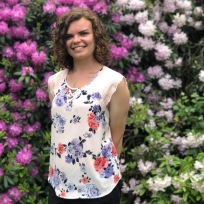 Claire is a PhD candidate in the Interdisciplinary Biomedical Graduate Program (IBGP) at the University of Pittsburgh. She received her B.S. in Biotechnology from Elizabethtown College (Elizabethtown, PA) in 2019. Claire is working to develop and test lipid biosensors, as well as analyzing the role of PI(3,4)P2 and PIP3 in breast cancer.

In her free time, Claire enjoys reading, running, complaining about running, and watching the Bachelor. 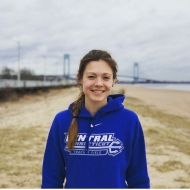 Morgan is a PhD candidate in the Interdisciplinary Biomedical Graduate Program (IBGP) at the University of Pittsburgh. Before beginning at Pitt she received her B.S. in both Biomolecular Science and Chemistry from Central Connecticut State University in 2019. After joining the Hammond Lab in 2020, Morgan has been investigating the spatiotemporal dynamics of the major players within the PI3K/AKT pathway.
Outside of lab you’ll find Morgan galivanting around Pittsburgh with her trusty feline and canine sidekicks, Archie and Nyla. 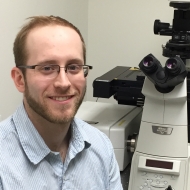 James earned his BS in Biochemistry from Indiana University of Pennsylvania in 2011.  He has since honed his laboratory skills across several fields including cancer cell biology, epigenetics, developmental biology, and lipid metabolism with the common thread of using DNA-based molecular tools and imaging to answer fundamental questions about the nature of cells. He worked in the lab since its inception in 2015.  He focused to optimize several cutting-edge technologies for use in the context of the lab’s interests while pursuing a research project to understand the identity of membranes based on their lipid profiles.  He also helped to generate an efficient and friendly laboratory environment.

Additionally, he has briefly held the world’s highest score on two “Rock Band” songs, scored a point against an Olympic fencer in a bout, completed an entire Spartan Beast without failing an obstacle and once successfully made over-easy eggs without overcooking them.

Brady received a B.S. in genetics and developmental biology from Penn State in May 2016. To further pursue his interest in molecular and cellular biology, Brady joined the Hammond lab in the fall of 2016 as a research assistant to develop novel biosensors for phosphoinositides. In the future, Brady would like to obtain a PhD in cell and developmental biology so that he can pursue a career in academia.

In his time away from work at Pitt, Brady enjoys cheering for the Nittany Lions football team… especially when they play the Pitt Panthers. He has a 100% achievement record for wearing either a Penn or Penn State jersey whenever an official photo is taken of him at Pitt.

And after all of that, he said farewell to PA-college rivalry in 2018 to commence grad school at Johns Hopkins. Good luck in MD! 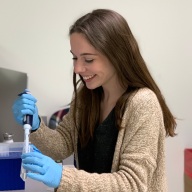 Colleen earned a B.S. in Biobehavioral Health from Penn State University in 2018. She joined the Hammond Lab in 2019 to develop her research skills and increase her depth of knowledge in the field of lipid signaling and cell biology. Colleen is currently studying  inositol 5-phosphatases in human disease, with a focus on PI3K signaling in cancer. Eventually, she hopes to pursue a joint MD/PhD program.

In her spare time, Colleen enjoys binge watching old Jeopardy tournaments, hanging out with her dog Briscoe, and rooting against the Pitt Panthers (Go Penn State!!). Colleen left the lab in June 2021 to pursue a biomedical sciences masters in Cincinnati. Enjoy Ohio, Colleen!

Jonathan earned his PhD in Biomedical Sciences from the National Autonomous University of Mexico. He is a biologist with interest in molecular mechanisms unveiled through powerful microscopy techniques. During his PhD he had first contact studying lipids, when he identified a cholesterol binding domain in one of the two players that perform Store Operated Calcium Entry. Now, he is trying to decipher the role of PIP2 dynamics in nano domains of the plasma membrane.

Out of the lab, he enjoys jogging in the forest (occasionally lost). He find great pleasure reading about philosophy and tasting new dishes.

Sumukh earned his B.S. in Molecular and Cellular Biology from Johns Hopkins University in May 2017. He was enrolled as a masters student in the Biomedical Master’s Program. Sumukh found his interest in cell biology research as an undergraduate lab assistant at JHU in Dr. Sergi Regot’s lab. He joined Dr. Gerry Hammond’s lab in September 2017.

Outside of lab, Sumukh enjoys traveling, reading about world history, and watching the Eagles try to win their first Super Bowl.

Sumukh graduated from the BMP in 2018, and is now working as a research assistant on the All of US study in PA.

Anna is a sophomore majoring in Biology with minors in Chemistry and Spanish. She joined the lab in Spring semester 2018 to work with Jonathan, looking at PIP2 nanoscale dynamics. She is currently working on the interaction of PIP5K enzymes with the plasma membrane using single molecule approaches. In her future, she hopes to further pursue medical research through an MD/PhD program.

When she is not in the lab, Anna is usually studying in the library, running in the park, laughing with friends, or eating some sort of Asian cuisine.

April Miller (undergraduate). April joined the lab in the Fall of 2017; she worked on the subcellular distribution of the master inositol lipid, PI.

Bridget Hunt-Tobey (Biomedical Master’s Program). Bridget graduated from Carnegie Mellon University with a BS in Biology and Social and Political History in 2016. She was a masters student in the Biomedical Masters Program.

Rasmine Baker (Biomedical Master’s Program). Rasmine earned a B.S in Biology from the University of South Carolina. She is currently a masters student in the Biomedical Science Program with future plans of attending medical school. Rasmine joined the lab in fall 2018 through summer 2019. She worked with Rachel on the homeostatic control of PIP2, with a focus on the biology of smooth muscle cells and PLC signaling in hypertension.

Sahana Sangappa (Undergraduate). Sahana joined the lab for Spring semester 2017 through the First experiences in Research program. She worked on genetic and genomic engineering projects to dissect the sub-cellular mechanism of action of a key lipid metabolizing enzyme.

Sam Herron (IBGP rotation student) Sam joined in fall 2017 for his first rotation (in-between the cram-fest that is Foundations).

Allyson Dull (Undergraduate) joined for the Spring and fall semesters of 2018; she worked on PI3K signaling pathways and cancer with Brady, and co-authored our J Cell Biol paper. Allyson left at the end of 2018 to get pursue some different experiences in the health sciences. Good luck!

Camilyn Clemenza was a summer undergraduate research student in the lab in 2016, before returning as a senior to Wash & Jeff. She is missed!

Megan Zercher and Ryan Muggleton worked in the lab in Spring 2016 for First Experiences in Research.